Hasdai ben Judah Crescas (Catalan: ; Hebrew: חסדאי קרשקש‎; b. Barcelona, c.1340; d. Zaragoza, 1410/1411) was a Spanish-Jewish philosopher and a renowned halakhist (teacher of Jewish law). Along with Rambam, Ralbag, and Albo, he is known as one of the major practitioners of the rationalist approach to Jewish philosophy, and his positions on issues of natural law and free will in Or Adonai can be seen as precursors to those of Spinoza. 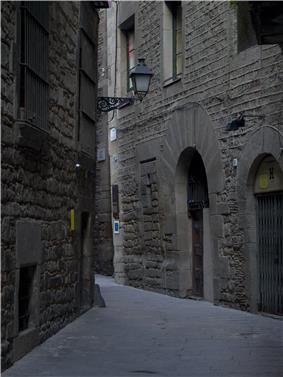 Carrer Marlet, in the old Jewish Quarter of Barcelona, where Crescas was born. The Sinagoga Major is on the left.

Hasdai Crescas came from a family of scholars; he was a disciple of the Talmudist and philosopher Nissim ben Reuben, known as The RaN. Following in the footsteps of his teacher he became a Talmudic authority and a philosopher of great originality. He is considered important in the history of modern thought for his deep influence on Baruch Spinoza.

After leaving Barcelona, he held the administrative position of crown rabbi in Aragon.[1] He seems to have been active as a teacher. Among his fellow students and friends, Isaac ben Sheshet (known as the RIBaSH), famous for his responsa, takes precedence. Joseph Albo is the best known of his pupils, but at least two others have won recognition, Rabbi Mattathias of Saragossa, and Rabbi Zechariah ha-Levi.

Crescas was a man of means. As such he was appointed sole executor of the will of his uncle Vitalis Azday by the King of Aragon in 1393. Still, though enjoying the high esteem even of prominent non-Jews, he did not escape the common fate of his coreligionists. Imprisoned upon a false accusation in 1378, he suffered personal indignities because he was a Jew. His only son died in 1391, a martyr for his faith, during the anti-Semitic persecutions of that period. Nevertheless he kept his faith.

Notwithstanding this bereavement, his mental powers were unbroken; for the works that have made him immortal were written after that terrible year. Another episode of his life worthy of note is connected with the appearance of the pseudo-Messiah of Cisneros, one of whose adherents he became. In 1401-02 he visited Joseph Orabuena at Pamplona at the request of the King of Navarre, who paid the expenses of his journey to various Navarrese towns (Jacobs, l.c. Nos. 1570, 1574). He was at that time described as "Rav of Saragossa."

His works on Jewish law, if indeed ever committed to writing – have not reached us. But his concise philosophical work Or Adonai, The Light of the Lord became a classical Jewish refutation of medieval Aristotelianism, and a harbinger of the scientific revolution in the 16th century.

Three of his writings have been preserved: 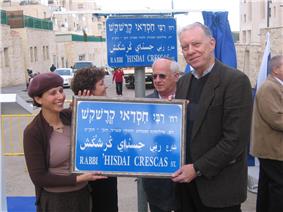 Opening Crescas street in Jerusalem, Jan 2011. In front to the right side: prof. Warren Zeev Harvey