It is a hybrid between Citrus maxima (pomelo) and Citrus reticulata (mandarin).[3] Many varieties of bitter orange are used for their essential oil, and are found in perfume, used as a flavoring or as a solvent. The Seville orange variety is used in the production of marmalade.

Bitter orange is also employed in herbal medicine as a stimulant and appetite suppressant, due to its active ingredient, synephrine.[4][5] Bitter orange supplements have been linked to a number of serious side effects and deaths, and consumer groups advocate that people avoid using the fruit medically.[6]

The bitter orange, whole and sectioned. 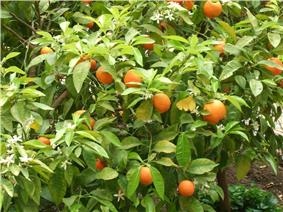 This orange is used as a rootstock in groves of sweet orange.[10] The fruit and leaves make lather and can be used as soap.[10] The hard white or light yellow wood is used in woodworking and made into baseball bats in Cuba.[10]

The unripe fruit, called narthangai, is commonly used in Southern Indian cuisine, especially in Tamil cuisine. It is pickled by cutting it into spirals and stuffing it with salt. The pickle is usually consumed with yoghurt rice thayir sadam. The fresh fruit is also used frequently in pachadis. The juice from the ripe fruit is also used as a marinade for meat in Nicaraguan, Cuban, Dominican and Haitian cooking, as it was in Peruvian Ceviche until the 1960s. The peel can be used in the production of bitters. In Yucatán (Mexico), it is a main ingredient of the cochinita pibil.

The Belgian Witbier (white beer) is made from wheat beer spiced with the peel of the bitter orange. The Finnish and Swedish use bitter orange peel in gingerbread (pepparkakor), some Christmas bread and in mämmi. It is also used in the Nordic mulled wine glögg. In Greece and Cyprus, the nerántzi or kitrómilon, respectively, is one of the most prized fruits used for spoon sweets, and the C. aurantium tree (nerantziá or kitromiliá) is a popular ornamental tree. Throughout Iran (commonly known as narenj), the juice is popularly used as a salad dressing, souring agent in stews and pickles or as a marinade. The blossoms are collected fresh to make a prized sweet-smelling aromatic jam ("Bitter orange blossom jam" Morabba Bahar-Narendj), or added to brewing tea. In Turkey, juice of the ripe fruits can be used as salad dressing, especially in Çukurova region.

The extract of bitter orange (and bitter orange peel) has been marketed as dietary supplement purported to act as a weight-loss aid and appetite suppressant. Bitter orange contains the tyramine metabolites N-Methyltyramine, octopamine and synephrine,[11] substances similar to epinephrine, which act on the α1 adrenergic receptor to constrict blood vessels and increase blood pressure and heart rate.[12][13] p-Synephrine alone or in combination with caffeine or other substances has been shown to modestly increase weight loss in several low-quality clinical trials.[14] Following bans on the herbal stimulant ephedra in the U.S., Canada, and elsewhere, bitter orange has been substituted into "ephedra-free" herbal weight-loss products by dietary supplement manufacturers.[15] Like most dietary supplement ingredients, bitter orange has not undergone formal safety testing, but it is believed to cause the same spectrum of adverse events as ephedra.[16] Case reports have linked bitter orange supplements to strokes,[17][18] angina,[11] and ischemic colitis.[19] The U.S. National Center for Complementary and Integrative Health found that "there is currently little evidence that bitter orange is safer to use than ephedra."[5] Bitter orange may have serious drug interactions with drugs such as statins in a similar way to grapefruit.[20]

Following an incident in which a healthy young man suffered a myocardial infarction (heart attack) linked to bitter orange, a case study found that dietary supplement manufacturers had replaced ephedra with its analogs from bitter orange.[21]