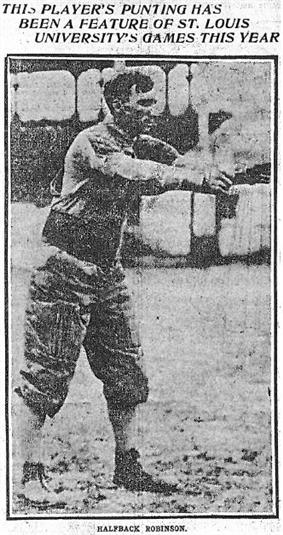 The sport's first triple threat, Bradbury Robinson of St. Louis University, ran, passed, received and punted out of the halfback position. It was as a halfback that Robinson threw the first legal forward pass to teammate Jack Schneider in a game at Carroll College on September 5, 1906.

Now that most offensive formations have only one or two running backs, the original designations do not mean as much, as the fullback is now usually a lead blocker (technically a halfback), while the halfback or tailback (called such because he stands at the "tail" of the I) lines up behind the fullback.

Responsibilities of the halfback

The halfback position is one of the more glamorous positions on the field, and is commonly viewed as a requirement for a team's success.[5] They are responsible for carrying the ball on the majority of running plays, and may frequently be used as a receiver on short passing plays. Occasionally, they line up as additional wide receivers. When not serving either of these functions, the primary responsibility of a halfback is to aid the offensive linemen in blocking, either to protect the quarterback or another player carrying the football. Sometimes the halfback or tailback can catch the ball from the backfield as he is an eligible receiver. In the last few decades the running back’s individual share of offensive output has declined as quarterbacks are generally treated as the cornerstone of the offense. [6]The demands of an up-tempo offense also favor a multiple running back system.

No position in American football can perform his duties successfully without the help of other players. Like the wide receiver, who generally cannot make big plays without the quarterback passing to him (with the exception of the end-around play), [7] Also, a halfback will generally have more rushing attempts than a receiver will have receptions. This is mainly because most football teams have one primary halfback to receive most of the carries, while successful passes will generally be spread between a number of different receivers (wide receivers, tight ends, running backs). The ability to protect the football on the run is the principal skill required of a running back. For an offense to succeed the ball has to be protected, and defensive attempts at stripping the ball will largely occur during runs on the inside of the playing field.

Characteristics of a halfback

There is a great diversity in those who play at the running back position. At one extreme are smaller, faster players. These fast, agile, and elusive running backs are often called "scat backs" because their low center of gravity and maneuverability allow them to dodge tacklers. Hall-of-famer Barry Sanders of the Detroit Lions exemplifies this running style. "Scat backs" still active in the NFL include Chris Johnson of the New York Jets, and Reggie Bush of the Detroit Lions.This type of running back has grown in demand due to changes in offensive play calling, style, and tempo. The trending spread offense demands a player that can utilize open space as much as possible as run blockers are sacrificed to spread out the defense.

At the other extreme are "power backs": bigger, stronger players who can break through tackles using brute strength and raw power. They are usually (but not always) slower runners compared to other backs, and typically run straight ahead (or "North-and-South" in football terminology) rather than dodging to the outside edges of the playing field (i.e. running "East-and-West") like shorter, quicker, lighter backs will often do. Power backs from previous generations were often classified as fullbacks, but in more recent times, players such as Jerome Bettis exemplify the power back position. More recent examples are Marshawn Lynch of the Seattle Seahawks, Steven Jackson of the Atlanta Falcons, Frank Gore of the San Francisco 49ers For many years the “power” running back was the central component of an offense. In that time period formations and rhythm favored this type of player. This sort of offensive scheme is now a rarity, as “power backs” take on supporting roles behind faster and more versatile running backs. In the modern age an “every-down” half back has to have a combination of speed and power running ability, along with a great capability to catch the ball. A primary running back also needs abundant stamina to remain consistent in an up-tempo offense.

In addition to skill at running the ball, some halfbacks in the Pro Bowl running backs who also had excellent receiving skills in Roger Craig and Ricky Watters. Craig became the first player in NFL history to both rush and receive more than 1,000 yards in a season. Currently Marshall Faulk is one of the top 20 pass catchers in NFL history. A good example of a dual threat running and pass-catching halfback is LaDainian Tomlinson; in 2003, while with the San Diego Chargers, Tomlinson rushed for 1,645 yards and caught 100 passes for 725 yards, giving him 2,370 total yards from the line of scrimmage, and he became the first NFL player ever to rush for over 1,000 yards and catch 100 passes in a season. Some teams have a halfback who is more skilled at catching short passes than the starting halfback on the team, and/or is better at pass blocking or "picking up the blitz" than that of the other backs. Known as a "third down" back, he is often put in the game in third down and long situations where a pass is needed to pick up a first down. He can also be used to fool the defense by making them think he is being put into the game for a pass play, when the play is actually a run. Mike Tolbert of the Carolina Panthers is a good current example of this kind of back.

Halfbacks are also required to help the offensive line in passing situations, and, in the case of the fullback, running plays. Halfbacks will often block blitzing linebackers or safeties on passing plays when the offensive line is occupied with the defensive linemen. On running plays, the fullback will often attempt to tear a hole in the defensive line for the halfback to run through. Effective blocking backs are usually key components for a running back's success (as seen in LaDainian Tomlinson record-breaking season in 2006).

Many teams also have a halfback designated as a "goal line back" or "short yardage specialist". This halfback comes into the game in short yardage situations when the offense needs only one to five yards to get a first down. They also come into the game when the offense nears the goal-line. Normally when an offense gets inside the 5-yard line they send in their goal-line formation which usually includes eight blockers, a quarterback, a halfback, and a fullback. The closer they are to the goal-line the more likely they are to use this formation. If a certain halfback is used often near the goal-line he is called the goal-line back. Short yardage and goal-line backs are usually larger power backs that are not prone to fumbling. Their job is to get the first down or touchdown by muscling through or pushing a large mass of players that are being blocked without dropping the ball.

A halfback might be called upon to return punts and kickoffs on special teams. Although this is most often done by wide receivers and defensive backs, such as cornerbacks (because they are generally the fastest players on the team), some halfbacks have enough speed and talent to perform this role. The NFL's current all time leading in kickoff return yards (14,014 yards) and punt return yards (4,999) by a halfback is Brian Mitchell. He also gained 1,967 rushing yards, 2,336 receiving yards, and 15 fumble return yards, giving him a total of 23,330 all-purpose yards, the second most in NFL history behind Jerry Rice.

On rare occasions, a halfback is asked to throw the ball when running a HB option.[8][9] This play is generally referred to as a half-back pass, regardless if the player throwing the football is a tailback or fullback. This play is risky because most halfbacks are inexperienced passers, and so it is often run only by certain halfbacks more skilled at passing than most. The halfback can also throw the ball while running a direct snap play where the center snaps the ball to halfback directly. This has become particular in teams that use the Wildcat formation, most prominently the Miami Dolphins, where running back Ronnie Brown would run, pass, and receive out of this set.

Evolution of the halfback

From the dawn of American football through the 1980s most offensive schemes focused on the running game. In a running based game plan the halfback was typically the cornerstone of the offense. This system focused on a physical run attack concentrated in the inside of the field, and therefore depended on a skilled “power back”. Pass-catching ability was not very important in this sort of halfback, and pure speed took a backseat to tackle-breaking ability. There was a focus on physicality over finesse, as this type of playing style earned the moniker of “smash mouth” football. In the past few decades the role of the halfback has gone through a great shift as most offensive game plans are now fueled by creativity and finesse instead of raw force. Stamina and durability is more important than ever in the hurry-up offense. On the other hand speed is often valued over strength, and pass-catching ability is sometimes valued over blocking proficiency. Power was once the most desired trait in a halfback, but has been over taken by the need for a diverse skill set. [10]

There has also been a shift in most offense’s dependence on halfbacks, as the quarterback is now generally considered the most essential part of a team. However, the average output of the halfback has not changed. Many of the “scat backs” in the modern era produce more total yards and touchdowns than their ancestor “power backs” by breaking off big plays on outside runs and receptions. The Spread offense and the hurry-up offense change the halfback’s role but create more opportunity for these plays. The Spread, the hurry-up, and the Pro style offenses dominate American football but the “smash-mouth” style of play is far from extinct. A power-running scheme is often utilized to counter an effective Spread attack, as it allows a team to control the clock and keep the ball out of the opposing offense’s control. This strategy is utilized in NFL, college, and all other forms of American football. The need for “power backs is” very prevalent, alongside the need for “scat backs”, and anything in between.