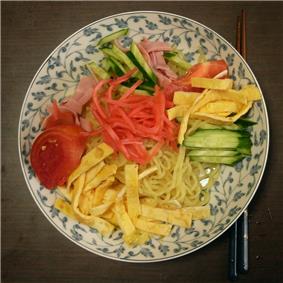 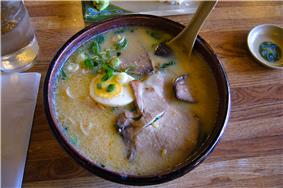 Japanese Chinese cuisine or Chuka is a style of Japanese cuisine served by nominally Chinese restaurants popularized in Japan in the late 19th century and more recent times. There is much confusion as both Japanese and Chinese reject that this food is of their own cuisine, however, it is clear this food is found primarily in Japan, though now it is re-popularized throughout Asia from Japan as "Japanese cuisine". This style of food is again different from modern Chinatown Chinese food in Japan, e.g. Yokohama Chinatown.

Chūka (中華, short for 中華料理 chūka ryōri, literally "Chinese food") is the adjective for Japanese style "Chinese" dishes, or the restaurants in Japan which serve them.[1] Chuka dishes originated in China, but have become modified over the years to suit Japanese taste, often with Japanese or even Western foods. They have changed enough that they are not identified as Chinese dishes by the Chinese themselves, nor as Japanese dishes by the Japanese. Japanese mistakenly consider them "Chinese", though the dish of origin in any Chinese restaurant would never be made in this way. In some cases, Japanese foods have been added, such as in the case of miso-ramen. In other cases, only the noodles are "Chinese", as in the case of hiyashi chūka, which was invented in Sendai in 1937, and uses Western food influences such as sliced cured ham. As meat (other than fish) was not common in Japanese cooking until recently, many meat dishes, particularly pork dishes, are of Chinese origin or influence.

Though formerly Chinese cuisine would have been primarily available in Chinatowns such as those in port cities of Kobe, Nagasaki, or Yokohama, and a number of the dishes are considered meibutsu (regional specialties) of these cities, Japanese-style Chinese cuisine is now commonly available all over Japan. As Japanese restaurants are often specialized to offer only one sort of dish, cuisine is focused primarily on dishes found within three distinct types of restaurants: Ramen restaurants, Dim sum houses, and standard Chinese-style restaurants.

Ramen (ラーメン) a dish of noodles in broth, usually with various meat and vegetable toppings, is also often referred to as Chuka Soba (中華そば, lit. "Chinese noodles.") In Japan, ramen is currently one of the most popular fast-food options. Though every Japanese city has numerous inexpensive ramen restaurants specializing in these noodles, countless varieties of instant ramen (much like the Japanese equivalent of the frozen TV dinner) are also available. These noodles have changed much since their origin in China. Four main types of ramen are widely available in Japan: shio ("salt"), shoyu ("soy sauce"), tonkotsu ("pork bone") and miso ("soy-bean paste"). While the toppings used in ramen are generalized based on the broth type, this can also vary from shop to shop. As complements to the noodles, ramen restaurants also commonly offer Japanese-style Fried Rice and Gyoza (Pan-Fried Dumplings).

Dim sum (点心 tenshin or 飲茶 yamucha in Japanese) in Japan is often very different from that which has been popularized in Chinatowns in the United States and Canada. In Japan's Chinatown areas, restaurants in which numerous dishes are brought around to diner's tables on carts do exist. But, in general, Dim sum items have only recently begun to gain popularity around Japan. Instead of carrying full menus of authentic, Chinese-oriented items such as stewed chicken's feet or tripe, Japanese dim sum restaurants, now found in larger cities such as Osaka and Tokyo seem to promote a cafe-like atmosphere. At these cafes, tea and snacks often become the focus, instead of full meals. In general, the menus seem to focus on cafe items, such as Shumai (minced pork or shrimp dumplings,) sho lon po (steamed dumplings with juicy meat inside) and the like. These are usually served alongside of pots of oolong or jasmine tea. 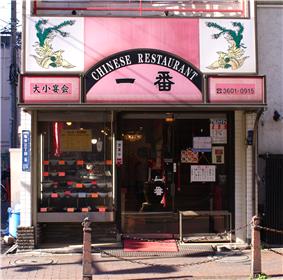 A Chinese restaurant in Katsushika, Tokyo.

Chinese Restaurants, (中華料理屋/chūka ryōriya or 中華飯店/chūka hanten) serve a distinct set of popular dishes that are not necessarily typical of authentic Chinese cuisine. They also cater to Japanese tastes. Currently, most towns in Japan have at least one Chinese eatery, as the cuisine is very popular. There are also many packaged sauces available to easily cook favorite Chinese-Japanese dishes right at home. Some of these typical dishes are: