Kutná Hora (Czech pronunciation: ; medieval Czech: Hory Kutné; German: Kuttenberg) is a city situated in the Central Bohemian Region of Bohemia, which is now part of the Czech Republic.

The town began in 1142 with the settlement of the first Cistercian monastery in Bohemia, Sedlec Monastery, brought from the Imperial immediate Cistercian Waldsassen Abbey. By 1260 German miners began to mine for silver in the mountain region, which they named Kuttenberg, and which was part of the monastery property. The name of the mountain is said to have derived from the monks' cowls (the Kutten) or from the word mining (kutání in old Czech). Under Abbot Heidenreich the territory greatly advanced due to the silver mines which gained importance during the economic boom of the 13th century.

The earliest traces of silver have been found dating back to the 10th century, when Bohemia already had been in the crossroads of long-distance trade for many centuries. Silver dinars have been discovered belonging to the period between 982–995 in the settlement of Malín, which is now a part of Kutná Hora. 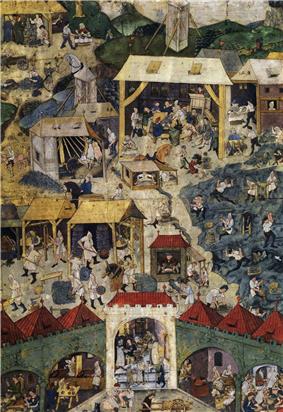 From the 13th to 16th centuries the city competed with Prague economically, culturally and politically.[1] Since 1995 the city center has been a UNESCO World Heritage Site.[2]

In 1300 King Wenceslaus II of Bohemia issued the new royal mining code Ius regale montanorum (also known as Constitutiones Iuris Metallici Wenceslai II). This was a legal document that specified all administrative as well as technical terms and conditions necessary for the operation of mines.[3] The city developed with great rapidity, and at the outbreak of the Hussite Wars in 1419 was the second most important city in Bohemia, after Prague, having become the favourite residence of several Bohemian kings. It was here that, on January 18, 1409, Wenceslaus IV signed the famous Decree of Kutná Hora, by which the Czech university nation was given three votes in the elections to the faculty of Prague University as against one for the three other nations.

In 1420 Emperor Sigismund made the city the base for his unsuccessful attack on the Taborites during the Hussite Wars, leading to the Battle of Kutná Hora. Kuttenberg (Kutná Hora) was taken by Jan Žižka, and after a temporary reconciliation of the warring parties was burned by the imperial troops in 1422, to prevent its falling again into the hands of the Taborites. Žižka nonetheless took the place, and under Bohemian auspices it awoke to a new period of prosperity.

Along with the rest of Bohemia, Kuttenberg (Kutná Hora) passed to the Habsburg Monarchy of Austria in 1526. In 1546 the richest mine was hopelessly flooded; in the insurrection of Bohemia against Ferdinand I the city lost all its privileges; repeated visitations of the plague and the horrors of the Thirty Years' War completed its ruin. Half-hearted attempts after the peace to repair the ruined mines failed; the town became impoverished, and in 1770 was devastated by fire. The mines were abandoned at the end of the 18th century. 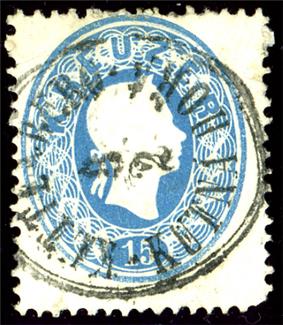 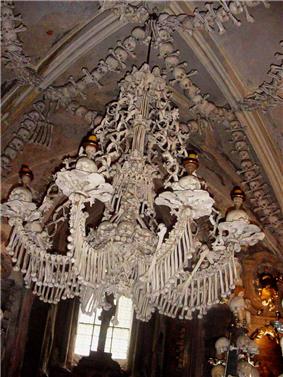 Chandelier made out of human bones inside Sedlec Ossuary

Bohemia was a crownland of the Austrian Empire in 1806, in the Austrian monarchy (Austria side) after the compromise of 1867). Until 1918, Kuttenberg was head of the district with the same name, one of the 94 Bezirkshauptmannschaften in Bohemia.[4]

Kutná Hora and the neighboring town of Sedlec are a UNESCO World Heritage Site. Among the most important buildings in the area are the Gothic, five-naved St. Barbara's Church, begun in 1388, and the Italian Court, formerly a royal residence and mint, which was built at the end of the 13th century. The Gothic Stone Haus, which since 1902 has served as a museum, contains one of the richest archives in the country. The Gothic St. James's Church, with its 86-metre (282 ft) tower, is another prominent building. Sedlec is the site of the Gothic Cathedral of Our Lady and the famous Ossuary.

Kutná Hora is twinned with:

List of World Heritage Sites in the Czech Republic