Ostrea edulis is a species of oyster native to Europe and commonly known as the European flat oyster, Colchester native oyster, mud oyster, or edible oyster (despite this latter name it is not the only oyster that is edible by humans).

The fossil record of this species dates back to the Miocene (age range: 15.97 to 0.012 million years ago). These fossils have been found in Belgium, Italy, the Netherlands, Egypt, Greece, Spain, the United Kingdom, Austria, France and Germany. [3]

Shells are oval or pear shaped, white, yellowish or cream in colour, with a rough surface showing pale brown or bluish concentric bands on the right valve. The two valves are quite different in shape and size, as the left one is concave and fixed to the substratum, while the right one is almost flat and fits inside the left. The inner surface is smooth, whitish or bluish-grey and pearly (the opalescent mother of pearl). An elastic ligament holds together these two valves. The meat of these molluscs may vary from creamy beige to pale gray. [5] 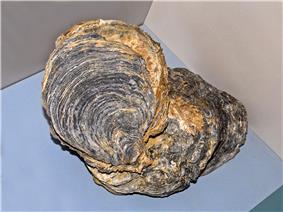 Fossil of Ostrea edulis from Pliocene of Italy

Colchester native oyster are gregarious molluscs that start their lives as males. They mature sexually after eight-ten months and may change sex depending on the water temperature. Usually the lifespan can reach about six years, with a maximum of 15 years. Adult oysters feed by filtration. [6] 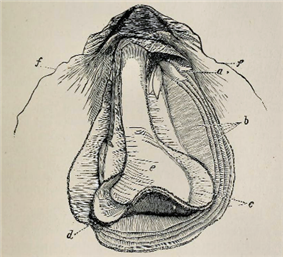 The species naturally ranges along the western and southern coasts of Europe from Norway to Morocco and including most of the British Isles and the Mediterranean coast.[7] Naturally viable populations have appeared in eastern North America from Maine to Rhode Island subsequent to artificial introduction in the 1940s and 1950s.[7]

Ostrea edulis can be found in estuarine and shallow coastal water with hard substrata of mud and rocks. [8]

Ostrea edulis is now also being maricultured in the states of California, Maine, and Washington in the United States. The species once dominated European oyster production but disease, pollution, and overfishing sharply reduced the harvest.[7] Today Pacific oysters, Crassostrea gigas, account for more than 75 percent of Europe’s oyster production.

U.S. oyster growers farm O. edulis in small quantities on both coasts. They are prized for their unique tannic seawater flavor, sometimes described as dry and metallic, and are more expensive than other American oysters.[7] The flavor is considered excellent for eating raw on the half shell.[9][10]